Children of all ages love these carnivorous plants.

I don’t know if it’s the gruesomeness of plants that catch and eat meat or the fascination with plants that move. But helping kids grow carnivorous plants is an exciting and interesting way to introduce them to gardening.

And for the budding scientist, tending their own plants will train their powers of observation and data gathering.

Especially the carnivores, or meat-eaters, that use the sneakiest of tricks to trap their insect dinners. Take bladderworts, for example. They appear so small and delicate growing in a quiet pond. But these are the fastest-known killers of the plant kingdom, able to suck in unsuspecting mosquito larvae in 1/50 of a second using a trap door!

Once the trap door closes on the victim, digestive enzymes similar to those in the human stomach slowly consume the insect. When dinner is over, the plant ejects the remains and is ready to trap again.

Venus Flytraps form hinged traps at the end of their leaves and produce sweet-smelling nectar to attract small insects. An insect or spider crawling along a leaf triggers the trap by touching tiny hairs on its inner surface. Venus Flytrap is the first plant everyone thinks about when you mention carnivorous plants.

The trapping mechanism is so sophisticated that it requires two trigger hairs to be stimulated in succession within 20 seconds of each other or one hair touched twice in rapid succession. This helps prevent the plant from wasting its energy on non-food items.

When the trigger hairs have stimulated the lobes of the trap will snap shut in about 0.1 seconds. The speed with which traps close can be used as an indicator of a plant’s general health and depends on the amount of humidity, light, size of prey, and general growing conditions.

If the insect can’t escape, it continues to stimulate the inner surface of the lobes. Then, the Venus Flytrap closes the trap tighter, sealing it airtight, and forming a “stomach” for digestion. Digestion takes about ten days, after which only the skeleton remains. The trap then reopens and is ready for the next meal.

Venus Flytraps are relatively simple to grow but have a few particular needs. Follow the detailed instructions that came with the plant.

Bladderworts are cultivated for their flowers which are similar to snapdragons and orchids. They grow in fresh water and wet soil because they need water to operate the bladder-like traps.

Bladderworts are unusual and highly specialized plants. Unlike most other flowering plants, they’re not clearly separated into roots, leaves, and stems. On the other hand, their vacuum-driven bladders are the most sophisticated carnivorous trapping mechanism to be found anywhere in the plant kingdom

The trapping mechanism is purely mechanical. No control is exerted by the plant. This is a totally different system than the triggered mechanism used by Venus Flytrap.

The only active mechanism involved is the pumping out of the water through the bladder walls. As water is pumped out, a partial vacuum is created which sucks the bladder’s walls inward. The trap is then set waiting for something to touch one of the stiff hairs sticking out the bottom of the trapdoor.

These hairs operate mechanically like levers. The slightest touch causes it to move and break the seal of the door. Then the bladder walls instantly spring back to a more rounded shape, the door flies open, and water rushes in carrying the animal that touched the lever. When the trap is full of water, the door closes and the prey is dissolved by digestive secretions.

The best bladderwort for kids would be one of the aquatic types because the aquatic species have the largest and most obvious bladders, and they can be observed in aquariums below the surface. Terrestrial species generally have tiny traps and all of the plant except for the flowers are under the soil.

Pitcher plants are striking plants with yet another method of capturing insects for food. Different genera have different methods of forming the “pitcher,” but they all have leaves shaped into deep cavities filled with liquid.

Pitcher plants lure insects into the cavities with the smell of sweet nectar or attractive colors. The waxy walls of the pitcher are slippery and lined with downward-point hairs that prevent the insects from crawling out. The insect is forced to fall into a pool of digestive juices near the leaf’s base.

Several species of pitcher plants grow well in terrariums. Shorter species grow well in a mixture of 2 or 3 parts sphagnum peat moss and 2 parts sand. They prefer indirect sunlight and require purified, distilled or rainwater. Tap water will kill all carnivorous plants. Keep the soil moist, don’t fertilize and feed it one insect weekly. There are many different types of pitcher plants. Consult the instructions that came with your particular plant.

Kids can study the types of insects attracted to the plant and learn about the different ways nature works.

Sundews are characterized by glandular tentacles, topped with sticky secretions, that cover their leaf surface. Insects are attracted by the sweet secretions of the glands and become trapped by their flypaper-like stickiness. The insect dies while the plant secretes digestive enzymes that dissolve the insect and release its nutrients. The nutrient soup is absorbed through the leaf surface and used to help fuel plant growth.

The tentacles are extremely sensitive and will curl around the prey in order to bring the insect into contact with as many digestive glands as possible.

Sundews have become popular ornamental plants because of their fascinating carnivorous nature and the beauty of their glistening traps. Cultivation requirements vary greatly by species. Generally, they require high humidity and constantly moist or wet soil. They need to be distilled or rainwater because nutrients, salts, or minerals in their soil can stunt their growth or even kill them. Sundews are commonly grown in a mixture of sphagnum peat moss and sand.

Butterworts are small plants with curled-edge leaves a few inches in diameter. Insects are attracted to the plant and become stuck in a sticky substance coating the leaves. The fluid contains enzymes that slowly digest the insect and provide nutrients to the plant.

Butterworts are a good carnivorous plant for kids and beginners because they are relatively easy to grow and require little care except for their feeding every other week. They are grown in a mixture of sphagnum moss and sand. They need to be almost constantly moist or wet. Unlike many other carnivorous plants that require sunny locations, many butterworts thrive in part-sun or even shady conditions.

10 photos to 5 Carnivorous Plants For Kids 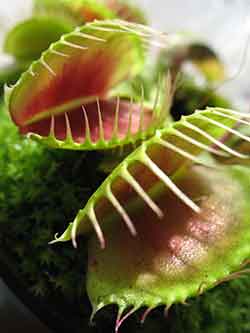