The rather small genus zygopetalum (Zygopetalum) is directly related to the family Orchidaceae. It combines 15 different types. This genus is represented by epiphytes, but sometimes in certain habitat conditions, they can become lithophytes or terrestrial plants. All species of this genus can be found in tropical areas of the Americas, but the largest populations are found in the wet forests of Brazil in the South America.

Such a plant is related to the sympodial type. Zygopetalum is not quite the usual growth pattern. It grows in a ladder, while it gradually forms a rhizome (a modified creeping stem), which rises above the surface of the soil, while each young pseudobulb grows slightly higher than the base of the old one. Smooth, green, short pseudobulbs have an oval or elliptical shape, while they are slightly flattened.

They seem to be in a nest, which is formed by flat and rather wide petioles of a pair of leaves located below (with age, the leaves fall off). On the upper part of the pseudobulb, 2 or 3 leafless leaves grow. Glossy, leathery leaves have a broad-lanceolate shape and well-defined longitudinally arranged veins.

Peduncles appear from the lower leaf axils. While young pseudobulbs appear, the peduncles also begin to grow. Before the new pseudobulbs fully mature, very beautiful flowers bloom, collected in small-flowered inflorescences that have the shape of a brush.

The flowers are pronounced zygomorphic. 3 sepals (sepals) and 2 real petals (petals) have interesting colors and can combine a variety of shades of burgundy-brown, green, and purple. In this case, the flowers are both monocolored, and with a variety of patterns and spots. 2 oval-pointed or obovate sepals, located at the bottom, slightly wider than the 3rd, which is located at the top and lies on the axis of symmetry. The petals are still of the third sepal.

The modified 3rd petal (lip) has significant differences from the other petals and sepals. It differs in both shape and size, and color. The lip has a fan-shaped shape with a wide base, and on its surface, there is a clearly visible horseshoe-shaped protrusion. Often the lip has a white color and on its entire surface, there are many longitudinal long strokes or stripes of purple color. At the same time, the lip stands out strongly against the general background of the corolla.

How to care for Zygopetalum Orchids at home

Representatives of this genus are the most capricious and demanding in the care of the entire extended family of orchids. In order for such a flower zygopetalum mackayi to grow and develop normally, it needs to provide conditions that are as similar as possible to natural ones. In this regard, such an orchid can only afford to grow experienced growers.

However, for most species, bright lighting is suitable, but it must necessarily be diffused. You should also protect the plant from the direct rays of the sun, shading it. The light level should be approximately 5000 lux. It is best to place the zygopetalum on the window of the eastern or western orientation. On the south window, you need a good shading from the sun, and on the north ― illumination.

If the lighting is too bright, it will provoke a rapid growth of flower stalks. Because of this, the growth of young pseudobulbs slows down, and they do not have time to mature well. As a result, such pseudobulbs have defective sprouts that can not bloom in the next year.

If there is little light, then such an orchid is unlikely to start blooming at all. And all because the development of peduncles is suspended, and there is also a death of the formed flower zygopetalums buds.

In the warm season, it is recommended to move the plant to the street (in the garden or on the balcony). However, you need to make sure that there is no threat of night frosts, while the flower will be in the fresh air. On the street, the flower will be provided with a natural difference in daily temperatures.

For cultivation, both a special block and a pot filled with a substrate are well suited. It should be remembered that the substrate should absorb the liquid well, so it includes fine-grained pine bark, expanded clay, sphagnum, and peat.

The most suitable pots for planting should be made of plastic. The fact is that the roots of such an orchid, as it were, grow into any porous surface (for example, clay), and therefore when transplanting, difficulties may arise.

On the block, you can grow zygopetalum only in an orchidarium or greenhouse, since it needs to provide the most favorable conditions. The block can be made from a piece of pine bark, which should be large enough. On the surface of the block, you need to fix the roots, and on top of them, you need to put a not very thick layer of sphagnum or coconut fiber.

For irrigation, only soft water at room temperature is suitable, which needs to be filtered. You can use heated meltwater or rainwater.

This genus of orchids differs from most others in that it reacts negatively to a strong drying of the substrate (and this is often recommended for other genera). The fact is that on the surface of the roots there is not a sufficiently thick layer consisting of velamen, which has a porous structure, which can absorb and retain water. In this regard, if the substrate is over-dried, the roots can die. But it is worth remembering that the liquid should not stagnate in the substrate, because this impairs its breathability, and oxygen is necessary for the root system.

However, there is one caveat here. Over the years, the velamen layer becomes thicker, as there is a gradual adaptation to the conditions of detention. In this regard, zygopetalums of the same species may have different roots. So, if the plant was grown all the time in arid conditions, its roots will be air, having the ability to store liquid. And if in this case, the substrate is always moist, then this can ruin the flower. If the velamen layer on the root system is very thin, then a long dry period will lead to the death of the roots.

Watering is recommended to be carried out by immersion. To do this, the container is filled with water and a block or pot is immersed in it for a third of an hour. After that, the plant is taken out and waits for the excess water to drain. Then it is put in its usual place.

The humidity of such an orchid needs quite high. The fact is that in her homeland, even during a long drought, the humidity is not less than 60 percent. The most suitable humidity is from 75 to 100 percent. To increase the humidity, in addition to spraying, it is necessary to use other methods.

At the same time, water in a tray filled with expanded clay, and an open container with liquid placed nearby, will not help much. In the absence of a specially equipped room or an orchidarium, you need to regularly use a household steam generator or a humidifier. Especially in high humidity need flowers grown on blocks.

Zygopetalum can react negatively to the top dressing if there are potassium and phosphorus salts in fertilizers since they quickly destroy the root system. Feed it carefully. So, it is recommended to fertilize the plant during intensive growth 1 time in 2 or 3 weeks. To do this, use a specialized fertilizer for orchids, while it is recommended to take ½ – 1/4 of the recommended dose on the package. Foliar zygopetalums top dressing is also systematically carried out, so the foliage is sprayed with a very weak nutrient solution.

Features of the transfer

Zygopetalums transplanting is carried out only if necessary, for example, when young sprouts will not fit in the container. During the transplant, it is recommended to carefully remove completely dried pseudobulbs and dried or rotted roots, which makes the bush more compact. At the same time, it should be remembered that it is extremely undesirable to remove shriveled pseudobulbs, even those that have lost their attractiveness and foliage because they contain valuable nutrients that zygopetalum needs for normal growth.

A six to eight-inch pot is good for the first years of a Zygo orchid, as they tend to cluster their pseudobulbs close to each other. Remember that these plants are not very pot-bound, so once you notice that the pot is becoming a little small and the roots are being squashed, it may be time for repotting.

Usually repotting is done every two to three years, or when you notice that the zygopetalums orchid is not growing well. It may be the case that salts have accumulated at the roots, and the plant cannot absorb useful minerals.

Most of the new growths are produced during spring and summer. You should time the repotting to coincide with the end of the plant’s blooming cycle.

Zygos are quite succulent, and you should use great care when repotting them, so as not to damage the pseudobulbs.

Often, a spider mite settles on the foliage. When it is detected, you need to arrange a warm (approximately 45 degrees) shower, while thoroughly washing the foliage. If there is such a need, then you can arrange a shower for the plant several times.

Frequent diseases are a variety of rot (bacterial and fungal), leaf spots. It is almost impossible to cure a diseased plant. In this regard, it is recommended to provide the zygopetalums plant with the most comfortable conditions for its growth and development, which should be very similar to natural ones, in order to avoid the development of diseases. 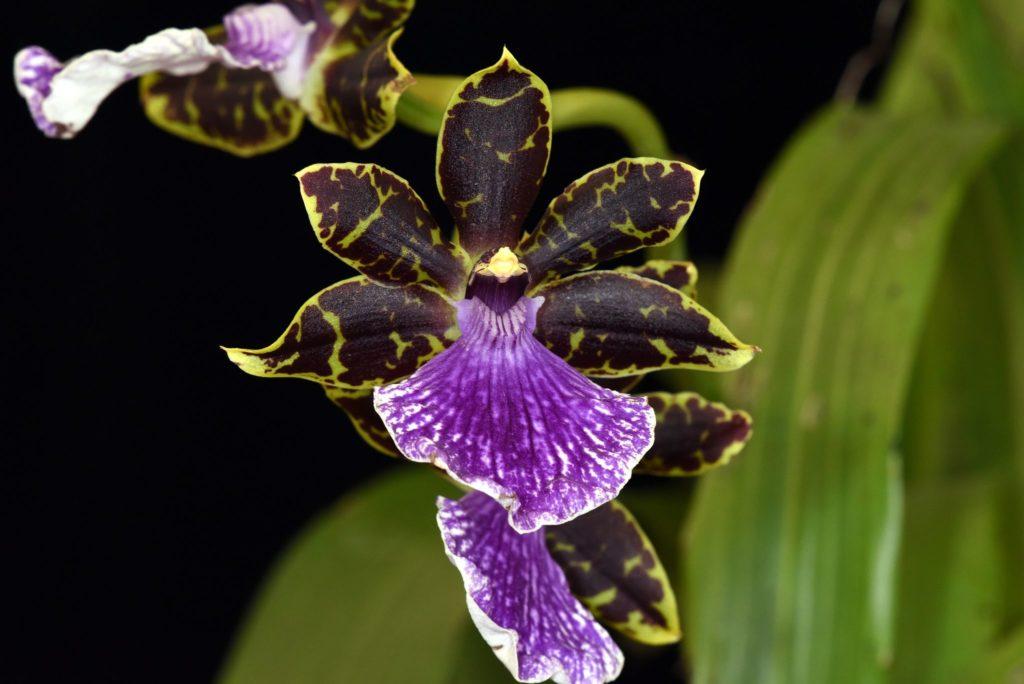